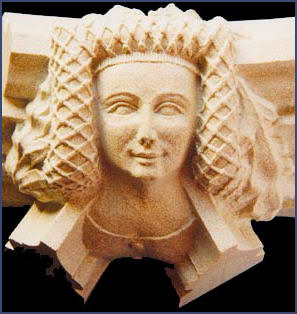 Joan was the daughter of Edmund of Woodstock, 1st Earl of Kent and Margaret Wake, 3rd Baroness Wake of Liddell and was born September 29, 1328. When Roger Mortimer beheaded dad over his support of his half brother Edward II after initially supporting Isabella. The family, including 18 month old Joan was imprisoned and held at Arundel Castle. Margaret’s cousin Edward III took over their care, his wife Phillipa was Margarent’s second cousin. “French chronicler Jean Froissart called her “the most beautiful woman in all the realm of England, and the most loving”. While Sir John Chandos’s herald described her as ‘que bele fu pleasant et sage – lovely, pleasant and wise’.”1

At 12, Joan married Thomas Holland without the necessary royal consent who was the younger son of a disgraced lord and thirteen years older. Thomas went crusading to Prussia and her family married her off to William Montacute, 2nd Earl of Salisbury. Joan never told of her first marriage out of fear that it could lead to Thomas’ execution for treason. But, surprise, surprise, Thomas made it home alive and wanted his wife back and asked Pope Clement VI for an annulment of her second marriage. This apparently tickled off William who imprisoned his wife for a year when he found out she wanted to go back to her other husband. 1349 was an exciting year, the annulment was granted and Joan went back to Thomas. However, King Edward III had decided to through a tournament on St. George’s Day that year to liven the spirits after the years of war and plague. During this tournament both of her husbands faced off against one another. The knights who took part were the founders of the Order of the Garter and is was quite possible that she was the woman it is named after, losing her garter celebrating after the battle of Calais. She also went with him when he fulfilled military duties overseas. The two went on to have five children in the eleven years he had left. She did remain friends with William.

In 1352, Joan had outlived all of her siblings and gained the titles, 4th Countess of Kent, 5th Baroness Wake of Liddell.

Joan wasn’t done marrying illegally, nope not Grandma. See, Edward and Phillipa had a son, Edward, who really liked his cousin. His parents weren’t too happy about this, she was their ward and they pair were first cousins so not legally marriageable. Other members of the family divorced for less. Not only that but though she had been a favorite of the Queen growing up the marriages had left her with a bit of a reputation. There was also this little thing that her surviving husband, William, had a legal claim to any children that she may bear. That is not a thing a King or Queen wants to have to think about when it comes to their heirs. They did end up getting a dispensation from Pope Innocent VI, (they went as far as getting dispensation from Pope Urban as well, heavily donating to Canterbury Cathedral.) after lying to him and saying they had already married. Theymarried October 10, 1361 at Windsor Castle under the eyes of his parents and the Archbishop of Canterbury. She became the first Princess of Wales.

In 1362 the couple moved to Bordeaux, when he became Prince of Aquitaine. They had two children. The oldest son, Edward died when he was six of bubonic plague leaving them Richard. Around the time Richard was born Prince Edward was drug into a war to help King Peter (Pedro) of Castile. Edward won, Peter was killed but it left the nation short of funds and Joan alone trying to defend Aquitaine. 1371 came along and Edward could no longer hold his lands in France, they returned home where with the plague was killing everyone. He made one last attempt to reclaim his father’s lands in 1372. He died June 1, 1376, when his father died the following year Richard became king at ten years old.

Being a child king is never easy, even when mom is around to be Regent, which if you’ve been following along doesn’t always happen. Times weren’t too good for young Richard, the 100 Years War was still going on, the Peasants Revolt happened, and Crusades were still going on. Joan had supported the Lollards—an early group of religious reformers initially led by John Wycliffe. The reform movement became violent and terrified Joan but helped Richard in the eyes of the populace.

She died in 1385 while pleading for the life of one of her son’s with Thomas Holland, Sir John Holland. Richard pardoned his brother and sent him on a Crusade. She was buried at Greyfriars with Thomas Holland. The Black Prince had wanted her buried with him and had a chantry for her at crypt of Canterbury Cathedral, which was decorated, with her face.
Sources

The Fascinating Marital Exploits of Joan, the Fair Maid of Kent